After all the baseball excitement and games in 2009, 2010 was a bit of a let-down you might say. But, we sort of had bigger fish to fry this year. In early April, we brought home the latest player to be added to our team, our son Brody.

Before Brody’s arrival, we did make it out to a few games in Arizona for Spring training, although, sadly, we lost those photos in The Great Hard Drive Crash of 2010.

After Spring Training, we took a bit of break, getting in most of our baseball via the couch, thanks to the MLB Extra Innings package. David also started picking up some games with STATS, Inc as a reporter, taking score from home, and even a couple of times from the press box at Petco Park.

We did, however, make it to two Dodgers/Padres games, one in San Diego, and one up at Dodger Stadium. At Petco, my parents let us use their season tickets (they share a package with friends) which are great seats, and then in LA we sat in the bleachers with my brother’s family.

We’re definitely looking forward to more baseball in 2011, starting with our annual Spring Training trip in less than two months!

I guess this blog sort of neglected to participate in the last couple of baseball seasons.

Since we just bought our 2011 Spring Training Tickets, I figured I better do a quick recap of the last couple of years. This year, maybe we’ll be a little more up-to-date on this ol’ blog.

Since our amazing road trip ended, we still had a few more baseball excursions before the year was up. We took a tour of Petco Park, went to a few games in the summer of 2009 and celebrated David’s birthday with an NLDS game at Dodger Stadium.

“I married into a love for baseball.”

My parents and brother give me crap because as a child I was your average luke-warm-fan-of-the-home-team {Padres} but when I married, I married into a love of the game, and a love of the Dodgers.

I always liked baseball. My brother and I even once scored tickets from a family friend to a very exciting playoffs game. But I never really knew or understood the game fully.

When David and I got married we lived on a half-a-shoestring budget. We had no cable but our college town happened to have a station on the Dodgers Radio Network, so we listened to just about ever Dodgers game on the radio (so old-school, huh?).

It was then that I “met” Vin Scully and began to learn all the ins and outs of the game, got to “know” the players and some of the Dodgers lore and history, and basically fell in love with America’s pastime.

Here are a few things I love about baseball…

-it’s (essentially) a summer sport, so it invokes feelings of long, warm days
-it’s a mellow, relaxing game, most of the time.
-other times it is so exciting that you worry your husband will fall off the top deck at Dodger Stadium because he’s jumping and cheering so enthusiastically.
-it’s a family thing for us (we have quite the extended family of baseball fans).
-it has a rich American history.
-it’s become a global game, especially in countries where they speak my other language.
-the culture, players and fans are generally pretty down-to-earth; the vast majority of pros are not known for their extravagant lifestyles (superstars aside)
-it spans all ages and generations.
-it’s a family-friendly sport.

I’d consider myself a pretty sport person, tolerant of almost every sport, but here are a few factoids on why I would definitely categorize myself, 29-year old crafty, stay-at-home mom of a girly, as a bonafide Baseball Fan…

-I’ve been to 20 out of 30 Major League Baseball parks.
-I’ve been to several Spring Training games, in both FL and AZ.
-I’ve been on a 3-week long road trip to a dozen games across the Midwest and East Coast.
-I allow a collection of bobbleheads in my master bedroom.
-I attempt to run a baseball blog with my hubby (we’re not very consistent with it yet though, but stick with us, we have some great ideas in the works!).
-I play fantasy baseball. With my mom. (we totally tanked last year. my father-in-law whipped us all. we vow to pay a little more attention to our team this year).

-my daughter (who went to her first game at 3 weeks old)’s favorite color is Dodger Blue. And she loves Manny.
-I even find myself watching baseball when David’s not home!

Can I get a shout out from any other female fans? How did you get turned on to baseball?

We’re headed out to catch a few Cactus League games this weekend- looking forward to some sun and some foul balls! And you can bet our little one will be stoked to see Manny!

We just got back from a great weekend in Arizona– complete with 3 Dodgers games and some great, warm weather.

Obviously, a highlight was seeing the Dodgers new complex at Camelback Ranch, but it was also fun to see them play at Surprise Stadium against the Royals  (where we are pictured above) and Goodyear Ballpark against the Indians (also brand-new). We didn’t get to see Manny play but we got to see lots of other players up close and personal.

In the near future, I’ll be posting reviews of the venues we visited, noting especially how they rate as far as family-friendliness, but in the meantime you can check out our photo album and get a little taste of our baseball weekend in the desert.

Oh, and I found a great license plate that would work for me: 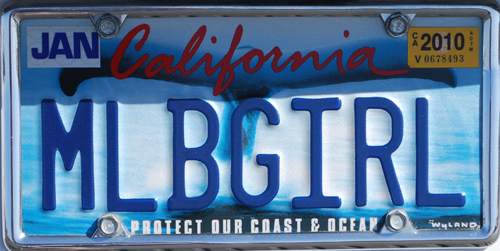 We had an awesome time on our trip to Florida for Spring Training. It was hard to come back to cold, brown Colorado after a week in warm, green Florida! Here’s a synopsis of our trip…

Saturday, March 1~
We arrived in Orlando, and headed to Downtown Disney to have dinner. We had yummy fish ‘n’ chips at an Irish pub and a yummy cookie from the sweets shop (we always used to love those cookies from Downtown Disney CA!). From there we headed to Melbourne, FL where we stayed the night.

We drove south down Highway 1 (just like in CA!!) to Vero Beach, where we went to our first Dodgers game at Holman Stadium at Dodgertown. It was awesome! We sat on the outfield grass which was perfect for Chiquita to crawl around on the blanket and play with her toys. She felt the grass for the first time and did not like it!! Then we met David’s parents at the campground where we were staying, in nearby Ft. Pierce. There were lots of “snowbirds” there including many from Quebec, and I enjoyed saying “bonjour” to them and little more French here and there.

Monday, March 3~
We went to Dodgers game #2 at Dodgertown. David & his dad “played golf” at our campground- it was 3 holes – sort of between mini golf and regular golf. 🙂

Tuesday, March 4~
Dodgers game # 3, also at Dodgertown! This was a night game; we had great seats and got free pint glasses that were given away in honor of the Dodgers’ 60th anniversary in Vero Beach. We got there plenty early to be able to watch some practice and we got James Loney (1st baseman)’s autograph and manager Joe Torre’s. We also got interviewed by a local tv news reporter about our trip to Dodgertown (we never got to see it though). Before the game that day, David & his dad played golf (lots of water hazards = not very fun game), and my mother-in-law and I took Chiquita swimming at the campground.

Wednesday, March 5~
We drove to Port St. Lucie to see the Dodgers play at the Mets. I got Nomar’s autograph, and David got Tommy Lasorda’s! After the game we packed up the camp and headed up to DisneyWorld, stopping for a delicious southern dinner at Cracker Barrel.

Thursday, March 6~
We spent the day at Epcot which was very fun (despite a little sprinkling of rain) and then came back to our campground, Ft. Wilderness, for a very entertaining dinner show. When we got out of the show, it was pouring rain!

Friday, March 7~
The guys played golf once more- this time they had more fun on a very nice course! Our last baseball game (#5) was a Braves/Tigers game at Disney’s Wide World of Sports, a huge sports complex, that includes the Braves’ stadium, lots of sports fields and the gym where my brother & I both competed for cheer nationals back in the day. Memories! We then headed to a cool area called Disney’s Boardwalk, made to look like an old fashioned Atlantic City- like waterfront area. We ate at the ESPN Club, which is like a smaller, slightly more intimate ESPN Zone- when we first arrived there were some real ESPN people (Orestes Estrada and someone else) doing a broadcast in the restaurant! Then we walked around a little bit and got another yummy Disney cookie!

View Our Photo Album From This Trip!

Well, it looks like our March “Would You Rather” decision got made for us by the cold virus. We were hoping to make it to the WBC tonight, but it looks like David is a little too far under the weather. So, instead, I decided we’ll just psych ourselves up on our upcoming Spring Training trip which is this weekend, and in the meantime, reminisce about our past travels to see both the Cactus League and the Grapefruit League.

Two years ago, when I was very pregnant with Chiquita, we headed out to Arizona for a baseball version of the “babymoon.” We went to two games and only stayed one night but had a great time (besides the blown tire on the drive out there).

The Angels have a beautiful training center at the Tempe Diablo Stadium and we drove straight there to catch a game, from our home which was then in Orange County, CA. (We’re technically Dodgers fans but I like to consider the Angels as our American League team). We had awesome seats (for a very reasonable price) and enjoyed a good game against the Padres.

We stayed in Downtown Phoenix, and walked around the Diamondbacks’ ballpark which we’ve yet to visit (hopefully this year!), and then the next day saw the Royals take on the Cubs at their field which they share with the Rangers in Surprise, AZ. The field is really nice but our “surprise” was the amount of traffic we had to go through to get into it. Again, the seats were good and so was the baseball.

You can view our photo album here and stay tuned for some 2008 Spring Training nostalgia tomorrow.